When you take the all the British and Canadian bands out of the running, how do you choose the best purely American rock band of all time? It's a harder question to answer than you think. Phabulousity and Mr Phabulous Radio have joined forces to create the Best American Band Bracket to settle this debate once and for all. Vote for your favorite bands and help choose the winner!

ABOUT PHABULOUSITY
Phabulousity are artisinal producers of fine fantasy and genre fiction. You can peruse this very web site to learn more about us. If you're not a fan of fantasy fiction, don't worry! You're still welcome here.

ABOUT MR PHABULOUS RADIO
Available exclusively on Spotify, Mr Phabulous Radio offers the most eclectic music playlist on planet Earth, curated by actual humans. The playlist is over 2000 songs long, and we add new songs weekly. Come join us!

Click on the image below to go the bracket and vote! 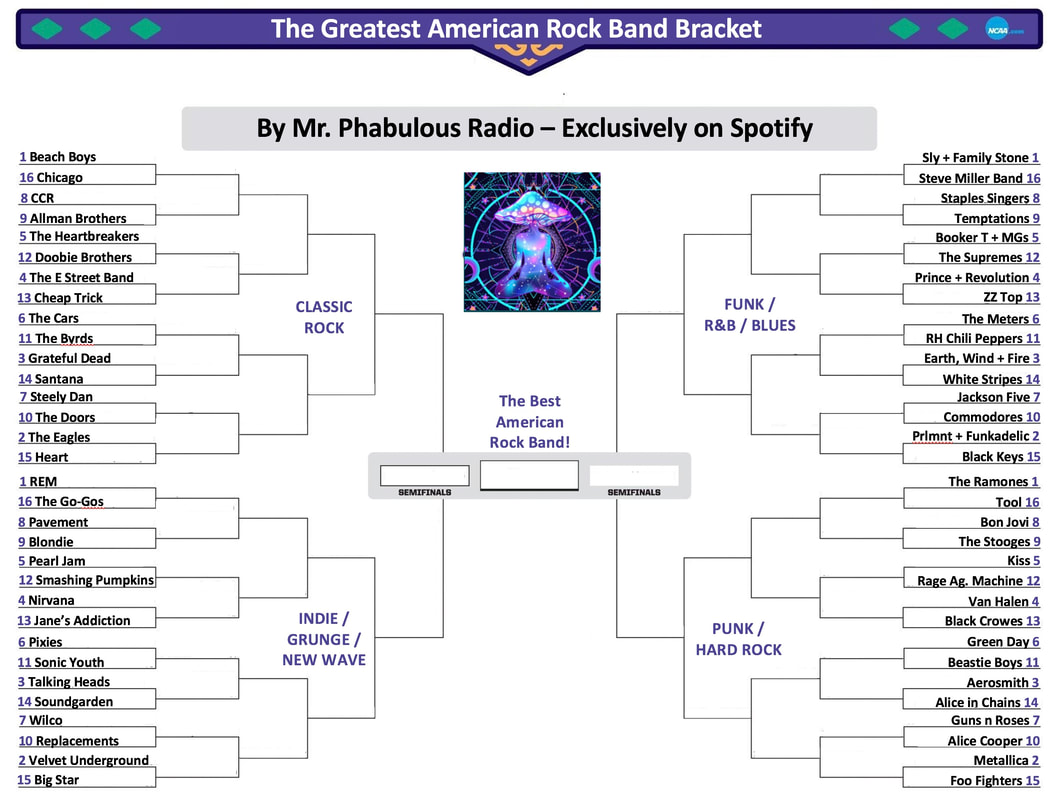 Ask any music fan to name the greatest rock band of all time, and you'll get the same small set of answers. The Beatles. The Rolling Stones. Pink Floyd. The Who. Led Zeppelin.

All of these bands are indisputably great--and every one of them is British. What about Rush? Canadian. What about Fleetwood Mac? Sixty percent British. When you narrow the field to 100 percent American born-and-bred bands, naming the greatest of all time becomes a much harder question to answer. Ask twenty people, "Who is the greatest American rock band of all time?" and you'll get twenty different answers.

Phabulousity and Mr. Phabulous Radio have created the Greatest American Rock Band Bracket to settle this important question once and for all.  Through rigorous scientific method, we have pre-selected the top 64 American rock bands and groups based on a combination of popularity and artistic influence. Our patented ranking methodology has further separated the top 64 into genre-based divisions and seeded the bracket so that upstart bands are pitted against heavy hitters.  With this methodology, we hope you will vote to help us choose the Greatest American Rock Band.

Still, one look at the above bracket will no doubt lead to questions and debate. So that you understand where we're coming from with this bracket, here are the ground rules we established for choosing the Top 64 American Rock Bands:

Rule #1: Groups, not solo acts
This is a contest of bands and groups, not solo artists. That's why you don't see Elvis Presley, Bob Dylan, Madonna, or Michael Jackson represented. When a solo artist is truly a member of a band, we did include him or her; that's why Tom Petty and the Heartbreakers, Bruce Springsteen and the E Street Band, and Diana Ross and the Supremes made the cut.

Caveat: We DID make allowances for naturalized U.S. citizens. That's why the bands of both Mexican-born Carlos Santana and Scotland-born David Byrne made the cut. Immigration is good, m'kay?

Rule #3: Both bands and groups are okay
The classic definition of a "rock band" would only allow for bands who played rock instruments onstage. We opted to include vocal groups as well, because vocal groups have a long and rich history in American popular music. Welcome aboard, Jackson Five and company!

Rule #4: Diversity is good!
We could have constructed a bracket made up entirely of classic rock bands; limiting the Classic Rock division to only 16 entrants left a lot of great bands out of competition. But a 64-band classic rock bracket would have left out every band that came along after the 1970s. It would also have resulted in a nearly 100 percent white-male bracket, which leaves out the rich and indelible contributions of African-American and female groups.

To increase bracket diversity, we created four divisions that account for the most popular genres of American rock and pop music. We did draw the line at rap and hip-hop groups--not to discount the artistic merit of those genres, but rather to limit the bracket to traditional rock and pop vocals and instrumentation.

No Top 64 list will satisfy everyone, but that's part of the fun! We like to think we got close. And now, it's time to vote.
CLICK HERE TO GO THE BRACKET AND START VOTING!